Nor does any other state!  H.R. 6139 is a bill in the U.S. House of Representatives which would give predatory lenders all the latitude they need to put consumers on a debt treadmill at infinite cost to the consumer and almost limitless benefit to the lenders.  How this directly affects very real Nevadans is the topic of a MUST READ article by J. Patrick Coolican in the Las Vegas Sun.

After cringing at the descriptions in the article about what predatory lenders do to desperate customers, more gasps might be in order as we look deeper into what the bill would actually DO.

The Congressional Research Service summarizes part one of the bill:

“Requires a qualified nondepository creditor seeking a federal charter to submit an application which includes in part: (1) a business plan for at least a three-year period with its primary business activities serving underserved consumers and small businesses; (2) a market demand forecast, the intended customer base, competition, economic conditions, financial projections, and business risks; (3) a marketing plan that describes the types of financial products or services such creditor intends to offer; and (4) adequate capital structure.” (emphasis added)

Those two words, “federal charter,”  are the crucial part of the matter.  H.R. 6139 would allow predatory lenders to fall under the jurisdiction of the Comptroller of the Currency — the agency that supervises federally chartered banks.

What’s missing? State consumer protection laws — which the newly minted “federally chartered” lenders could circumvent by shuttling under the OCC jurisdiction.   Nevada has placed restrictions on predatory lending under the provisions of NRS 604A since 2007.  Section  NRS 604A.420 should be of additional interest: It prevents predatory lending to members of our Armed Forces, which would include Creech AFB in Indian Springs, NV; Nellis AFB in Clark County, and the Fallon Naval Air Station.   The state provisions define “high interest lending,” and prohibit making loans which amount to more than 25% of the individual’s gross monthly income.

By allowing the predatory lenders to slither under the OCC umbrella the bill would also protect them from oversight by the Consumer Financial Protection Bureau.

In its “Snapshot Report,” October 10, 2012 (pdf) the CFPB summarized the complaints it has received in regard to banking practices:

Thus we have a relatively new agency which has already received and processed some 10,300 consumer complaints, 1,900 of which are still unresolved.  This doesn’t sound like all the lending industry members are yet practicing “safe lending.”

The second major section of the bill is summarized by the CRS as follows:

“Directs the Comptroller to: (1) ensure that Credit Corporations focus their business operations primarily on providing underserved consumers a variety of affordable and commercially viable financial products or services, including some that facilitate personal savings and enhance the credit record of such consumers; (2) facilitate business partnerships among Credit Corporations, insured depository institutions, other nondepository creditors, third-party service providers and vendors, and nonprofit organizations in order to ensure greater credit access for underserved consumers and small businesses; and (3) examine and supervise the Credit Corporations.” (emphasis added)

Who are those “underserved consumers?” Many of them, as reported by Mr. Coolican, are in Nevada:

“Nevada leads the nation in the percentage of residents who are “underbanked” — meaning they have some sort of bank account but also resort to high-interest loans from nontraditional lenders to make ends meet. In theory, a borrower uses these services to tide him or her over until the next paycheck because he or she doesn’t have access to a bank loan or credit card. One-third of Las Vegas Valley residents use these services.” (emphasis added)

Riding the tide until the next paycheck could be a problem for those who would be at risk of being “sold” a pay day loan greater than 25% of their gross monthly income should that protection by the State of Nevada no longer be available to them.  Nor could these “underbanked” individuals and families count on the State to protect them from pay day lenders who want to issue multiple loans.

“Requires Credit Corporations to make available to each consumer to whom a financial product or service is being offered: (1) information on how a consumer may obtain financial counseling services, the benefits of following a regular personal savings program, and how consumers can improve their credit ratings; (2) disclose clearly and conspicuously in the loan agreement the true cost of the loan, including all interest, fees, and loan related charges; and (3) offer an underserved consumer who is unable to repay an extension of credit with a loan repayment term of less than 120 days, an extended repayment plan, at no cost to the consumer, at least once in a 12-month period.”  [CRS]

Not. So. Fast.  The Center for Responsible Lending research found that —

“Although marketed and advertised as a quick solution to an occasional financial shortfall, the actual experience of payday loan borrowers reveals there is nothing quick about the loan except its small principal. According to new CRL research that tracked about 11,000 payday borrowers over two years, many borrowers remained indebted for the 24 months that followed their initial loan.” 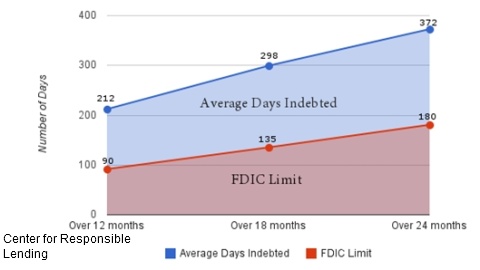 The lending isn’t quick, it isn’t inexpensive (with rates up to about 400%), and it is borderline pathological.   Credit counseling is fine — depending upon who does the counseling.  Even adequate credit counseling should put off the borrower from even considering a pay day loan.  Disclosing the true cost of the loan is fine — but it may very well NOT prevent the individual from taking on more debt in subsequent transactions.  Further, an extended re-payment plan for one loan does nothing to ease the pain of the subsequent ones.

There is one more thing we should notice about H.R 6139 — the enthusiasm for placing the predatory lenders under the jurisdiction of the OCC (which doesn’t want it).

Why?  Because the Consumer Financial Protection Bureau is tasked with handling consumer complaints about predatory lending practices, and has a special section dealing with the issues affecting military families and their  lending or home ownership issues.   AND because the Federal Deposit Insurance Corporation created the Division  of Depositor and Consumer Protection in August 2010.

“The establishment of a new division dedicated to depositor and consumer protection will provide increased visibility to the FDIC’s compliance examination and enforcement program. That program ensures that banks comply with a myriad of consumer protection and fair lending statutes and regulations. While Congress established the new bureau to promulgate consumer protection rules, the FDIC maintains the responsibility to enforce those rules for banks with $10 billion or less in assets and to perform its traditional depositor protection function.” (emphasis added)

And, there we have it. The FDIC has a new initiative to regulate the activities of lending institutions under its jurisdiction to curtail predatory lending practices, and the CFPB is tasked with restraining predatory lending practices, so … the only regulatory agency remaining would be the Office of the Comptroller of the Currency which oversees nationally chartered banking institutions.

The bill now sits in the House Subcommittee on Financial Institutions and Consumer Credit to which it was referred on October 1, 2012.  It should stay there.  Forever. And ever. Amen.

Comments Off on An Amen Chorus: Nevada Doesn’t Need H.R. 6139