Mark Amodei, A National Debt Primer – With Charts and Pictures

Representative Mark Amodei (R-NV2): “As a fiscal conservative, I believe that our nation’s deficit is out of control. We now borrow 42 cents for every dollar we spend. The bloated federal government spends some of that money on frivolous projects that benefit only a select group of special interests and other needless expenses. A significant portion of revenue also goes to fund Medicare, Medicaid, and Social Security — programs that are headed towards insolvency and need significant reform to become financially viable.”

#1.  I believe that our nation’s deficit is out of control. We now borrow 42 cents for every dollar we spend.   Really?  Easy there Lone Ranger, there’s something breathless about this that doesn’t reflect historical reality.  For example, as of 2009 the federal deficit stood at 10.1% of the U.S. economy. However, during World War II our debt stood at 30.3% — and the nation didn’t collapse, and we won the war.  In FY 2012 we’re looking at a deficit of some 7.6%, not a happy number, but nowhere near the historical high; and, before we become even mildly hysterical about the figure we should note that March 2012 budget projections (pdf) from the Congressional Budget Office the projection should decline to 6.3% in FY 2013, and drop to 5.8% in FY 2014. [MJ]

How is something “out of control” when it’s actually declining?

#2.  From whence comes the borrowing?  Of the current (March 2012) totals,  $15,885.5B debt, $6,397.2B is owned by the Federal Reserve and Intergovernmental holdings, another $9,185.1B is privately held.  $184.8B is in the form of U.S. Savings Bonds.  State and Local governments hold $436B of our national indebtedness, while foreign investors hold $$5136.0B of it. [Treas.doc]  If the Debt is a monstrous, heinous, horrible problem — we should ask again — why hasn’t the yield curve moved? As we can see from the chart for today’s yield curve, it’s costing us less that 1% to “sell” American debt for most securities.

Further,  if we look at the trends in interest rates for U.S. securities, the trend is generally downward. 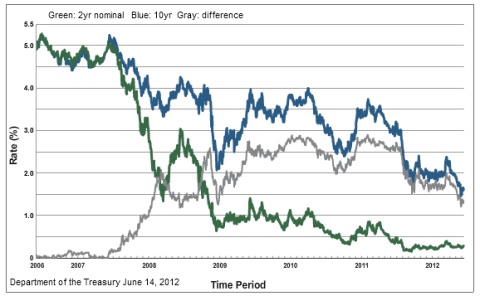 One doesn’t need to be an academically trained economist to observe that someone (indeed, lots of people) think U.S. securities are a good investment.  If the DEBT was a horrible, heinous, terrible, icky thing this would not be the case.

#3. “The bloated federal government spends some of that money on frivolous projects that benefit only a select group of special interests and other needless expenses.”   What, pray tell, is a frivolous project?  Would it be the TARP disbursements to our national banking system in the wake of the Crash of 2007-2008?

Of course, we could have let the financial system collapse in a messy heap and launched another Great Depression…

How about wasted taxpayer dollars in the Pentagon?  The New York Times offers a person the chance to figure out how to save money in the Defense Department, in order to meet the “cuts” deemed necessary above the current savings proposed by the Obama Administration.  By the way, good luck with this exercise!

OK, what about the inevitable Solyndra talking point/question?  Return with us now to the Jon Stewart Show (video) , which pointed out that the private sector rate for investing in eventually bankrupt companies as exemplified by Bain was a generous 22%, while the number of Department of Energy’s record is a more reasonable 8% bankruptcy rate.  (October 25, 2012)

#4. “A significant portion of revenue also goes to fund Medicare, Medicaid, and Social Security — programs that are headed towards insolvency and need significant reform to become financially viable.”

Here comes the “we gotta reform entitlements” argument.  In a reality based world we “don’t gotta do much reforming.”  And, we certainly don’t need to hand the Wall Street Wizards the coffers of the Social Security Administration.  As has been discussed numerous times on this blog, Social Security is NOT going bankrupt.  In 2011 Social Security ended the year with a $2.7 TRILLION surplus.

“So why all the talk about Social Security “going broke?” That theme filled the news after release of the latest annual report of the Federal Old-Age and Survivors Insurance and Federal Disability Insurance Trust Funds, as Social Security is formally called.

The reason is that the people who want to kill Social Security have for years worked hard to persuade the young that the Social Security taxes they pay to support today’s gray hairs will do nothing for them when their own hair turns gray.

That narrative has become the conventional wisdom because it is easily reduced to a headline or sound bite. The facts, which require more nuance and detail, show that, with a few fixes, Social Security can be safe for as long as we want.”  [Johnson, Reuters]

Medicare and Medicaid are another matter.  We DO need to do something to reduce health care costs.  And, if we’re serious about adding resources to the trust funds which support Medicare and Social Security we could increase the capped rate of $110,100 in earnings.   There is no question of Social Security viability.  We do have some work to do to make the savings in the health care segments — there will be some savings with the implementation of the Affordable Care Act — the infamous $716B cut — which turned out to be $716B in savings in part from reducing the taxpayer subsidization of profitable private Medicare Advantage plans.

Before Representative Amodei, and his Republican cohorts, take the jump off the fiscal cliff, which they created, (pdf) they might want to attend to the FACTS concerning entitlements — those programs to which we are entitled because we paid for them — and to consider the proposition that it is not a good thing to balance the federal budget on the backs of the elderly, the ill, and the disabled.

Comments Off on Mark Amodei, A National Debt Primer – With Charts and Pictures