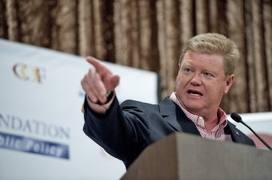 Nevada Representatives Mark Amodei (R-NV2) and Joe Heck (R-NV3) voted against the Supplemental Appropriations bill containing relief for victims of Super Storm Sandy.  [roll call 23]  There are a couple of boilerplate GOP talking points which underpin opposition to the supplemental funding bill.  There’s the “It’s full of pork,” argument.  Pork baloney.  It’s often handy to remember that one man’s pork can easily be another man’s economic development idea, and secondly — when haven’t supplemental spending bills contained several disparate funding authorizations?  That’s what supplemental bills are — bills to provide funding for items previously unbudgeted — like, say, the cost of operations in Iraq and Afghanistan during the Bush Administration?

There’s the “let’s take our time, some of the provisions don’t kick in for two years, so what’s the rush?” argument.  Containing therein an equal measure of pork baloney.  Unlike the ATM the right wing imagines the government to be — it takes TIME to get federal appropriations.  Applications must be filed, reviewed, approved, authorized, and then the money comes.  Why all that red tape?  Because there are those who cry “Waste, Fraud, and Abuse” every time federal money is spent unwisely, and the approval and accounting measures are there to restrain the temptations for Waste, Fraud, and Abuse.

There’s the “It’s a real tragedy, but we have a Debt Crisis” argument.  More pork baloney.  The current “Debt Crisis” is a GOP manufactured for cable news phenomena, a total reversal of Vice President Dick Cheney’s 2004 comment that “Reagan proved deficits don’t matter.”   Yes, we have too much debt, BUT it’s far from a “crisis” except in the fevered minds of those who think Social Security, Medicare, Medicaid, and unemployment insurance benefits are “The Problem,” and not two off the books wars, one expansion of the Medicare prescription program with no funding formula, and one massive recession.

Then there’s a point of true irony.   There was an amendment to H.R. 152 from Congressman Fleming (R-LA) ” An amendment numbered 9 printed in Part C of House Report 113-1 to cut $9,800,000 from the Fish & Wildlife Service for rebuilding seawalls and buildings on uninhabited islands in the Steward McKinney National Wildlife Refuge in Connecticut.” This, after Congress authorized spending some $71 million for wildlife refuge restoration projects in the wake of Hurricane Katrina.   Representatives Amodei and Heck voted for this amendment too.  [roll call 19]  Representatives Titus and Horsford voted no.

Another moment of madness, offered by Representative Broun of Georgia “called for An amendment numbered 4 printed in Part C of House Report 113-1 to strike $13,000,000 in funding to “accelerate the National Weather Service ground readiness project“.  (Amendment 6) Really?  In what universe is it advisable to cut funding for “ground readiness projects” in the face of potentially devastating storms and other serious weather related situations?   Once more Representatives Amodei and Heck voted in favor of this amendment.  [roll call 17]  Representatives Titus and Horsford, who must have been listening to their elders who taught them “An ounce of prevention is worth a pound of cure,” voted against this ill-conceived amendment.

Perhaps the Pork Baloney arguments can find favor in the Fever Swamp that is the controlling right wing of the Republican Party, but to enthusiastically vote for wildlife and coastal projects after Katrina in 2005 when the federal debt increased by approximately $553.7 billion — and then to scream “The Debt Is Coming, The Debt Is Coming,” in 2013 is a bit hypocritical. 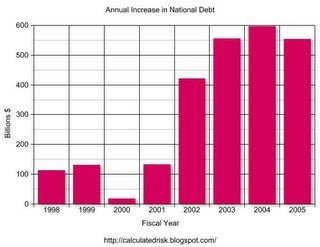 Hmm, 2002 to 2005 — that would be part of the Bush Administration’s contribution to the national debt?  Oh well, Representatives Amodei and Heck have offered us yet one more example of why their brand of government is the problem — a government that will not help its citizens in times of real crisis is problematic indeed.

One response to “Amodei, Heck Blow Off Sandy Victims”