Assemblyman Randy Kirner (R-NV26) is about to secure his position as the poster boy for ALEC in this session of the Assembled Wisdom.  From the ever informative LTN:

“As we discussed yesterday, the Nevada Legislature has devolved into chaos and treachery… Yet again. This time, Assembly Member Randy Kirner (R-Reno) is threatening to kill SB 353, the sexual orientation conversion therapy ban, and possibly additional bills that have nothing to do with union issues, because he’s upset his ALEC bills to blow up unions and hand public servants’ retirement savings (PERS) to Wall Street aren’t moving. Oh, yes. That’s right. He’s going there!

But wait, there’s more. Now that Kirner is hinting that he’s a possible swing vote for the Nevada Revenue Plan, Governor Brian Sandoval’s (R) preferred revenue raising tax reform package, there’s real fear that Kirner is trying to abuse this tense situation to extract some sort of PERS deform (in addition to the bipartisan deal already reached on SB 406).”

And, why not?  A quick look at the funding behind Assemblyman Kirner’s campaign shows the predominance of right wing money flowing into Kirner’s campaign coffers.  That “Students First” item on the donor list should be a big clue.   “Students First” is Michelle Ree’s anti-union outfit, which was caught working with ALEC in Connecticut to promote the ALEC agenda in 2012.  [BProg]  This year the organization was caught in New Mexico trying to coordinate an anti-union and anti public school campaign using social media and bloggers to promote “educational reform.” [Ravitch]

Kirner’s positions on “reforming” Nevada PERS are straight out of the ALEC playbook. (pdf)  If we’d like a preview of what ALEC and the Koch financed State Policy Network have in mind – handing over public employee retirement funds to the players in the Wall Street Casino – look at Kansas. [Politicususa]

Kirner was also the beneficiary of the Retail Association of Nevada, $5,500 in donations.  Interestingly enough, RAN is a first cousin of the Committee to Protect Nevada Jobs; RAN’s CEO is Mary Lau, who is also listed as the treasurer of CPNJ for 2013.  In August 2013 RAN was pleased to insert a tip of the hat to the Committee to Protect Nevada Jobs for its opposition to the “teacher tax” initiative. (pdf) 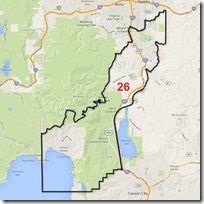 Assemblyman Kirner’s notion that he can blow up this session of the Legislature in search of satisfaction on right wing issues may reflect the district – the 26th is almost exclusively white (86%) and 46% Republican. Most residents live in owner occupied housing, and most are between the ages of 18 and 59. [LegNV pdf] [More: Statistical Atlas]   Kirner ran unopposed in the last election, getting 50.03% of the total vote. [SSE]

Given the last election results, even considering his close primary, is Assemblyman Kirner functioning as if he were in a safe seat?  Or, given the close primary is he sliding to the radical end of the right wing spectrum because of opposition which emphasized “no new taxes,” “school choice,” and “it’s not government’s job to create jobs?” [Krasner] Little wonder the primary was close given the ideological proximity of the two Republican candidates.

Can Democrats in Assembly District 26 move the needle?  There are 12,077 registered active voting Democrats in AD 25 out of 41,198 total. There are 18,763 registered active Republican voters in the district. There are 1,881 registered members of the Independent American Party, and another 445 registered Libertarians. 7,421 are non-partisan registered voters.  [NVSoS] There are 64,703 residents of the District.  Approximately 63.7% of the residents of the District are active, registered, voters.  First, it’s hard to move the needle without a race, and there is an obvious need for candidate recruitment in AD 26. Secondly, given the 81% turnout in 2012 compared to the 45.55% turnout in Washoe County in 2014, could Democrats “move the needle” if there were a candidate for the Assembly seat in a presidential election year campaign?

In the meantime, we’re treated to what can happen with a “safe seat” ideologically driven incumbent with funding and support from corporate interests and conservative allies – pro gun, anti-union, and anti-gay issues become the basis for retail politics in the District.  Waving these banners shouldn’t be allowed to obscure real issues facing real people in the Silver State.

Comments Off on Kirner’s Folly