Donald The Destroyer Aims at the Dodd-Frank Act

Nothing will set the DB flashing quite like a threat to deregulate the financial sector.  And  Donald the Destroyer has done it.

“The presumptive Republican presidential nominee told Reuters in an interview published Tuesday that in two weeks he’ll release a financial regulation platform that includes repealing most of the Dodd-Frank Wall Street Reform and Consumer Protection Act.

“I would say it’ll be close to a dismantling of Dodd-Frank,” Trump said. “Dodd-Frank is a very negative force, which has developed a very bad name.” [TheHill]

Let’s be very clear at this point.  Here’s what the Dodd-Frank Act contains:

“Taxpayers will not have to bear the costs of Wall Street’s irresponsibility: If a firm fails in the future it will be Wall Street – not the taxpayers – that pays the price.

Separates “proprietary trading” from the business of banking: The “Volcker Rule” will ensure that banks are no longer allowed to own, invest, or sponsor hedge funds, private equity funds, or proprietary trading operations for their own profit, unrelated to serving their customers. Responsible trading is a good thing for the markets and the economy, but firms should not be allowed to run hedge funds and private equity funds while running a bank.

Ending bailouts: Reform will constrain the growth of the largest financial firms, restrict the riskiest financial activities, and create a mechanism for the government to shut down failing financial companies without precipitating a financial panic that leaves taxpayers and small businesses on the hook.” [Link for more information]

So, let’s review.  What Donald the Destroyer is proposing is that in repealing the Dodd-Frank Act – taxpayers WILL be on the hook for Wall Street debacles, and there will be NO mechanism by which a failing financial institution can be shut down without damaging taxpayers and small business.  What Mr. Trump is advocating is essentially more taxpayer secured bailouts, more financial system insecurity, and more games played by bankers/hedge fund managers with depositors money.  Like that?

Dodd-Frank is a very negative force?  Says whom?  Certainly not the writers at Fortune magazine.

“The U.S. economy has recovered since the financial crisis, and it’s impossible to know how much lending would have increased without Dodd-Frank. Indeed, the amount of cash that banks hold collectively is up nearly $700 billion in the same time. At least some of the jump has to do with the fact that Dodd-Frank was passed after lending had dropped considerably. But even factoring in that plunge, there are now $800 billion more in bank loans outstanding than there were before the financial crisis, when everyone seems to agree there was less financial regulation.”

What “negative force?”  With $800 billion more in outstanding bank loans than there were before the crash and smash of 2007-2008, the provisions of the bill obviously haven’t diminished lending.  But wait, as they say in the infomercials, there’s more:

“Recently, business lending—the kind that Donald Trump says Dodd-Frank has hurt the most—has increased rapidly. Lending to commercial and industrial companies, which often referred to as C&I lending, jumped $71 billion in the first quarter, and it is up 60% since Congress passed Dodd-Frank. In the first quarter, C&I lending eclipsed residential mortgage lending for the first time since the 1980s.”  [Fortune] (emphasis added)

But, why take Fortune’s word for it? Let’s take a look at the Federal Reserve’s tracking of C&I loans for the last ten years. 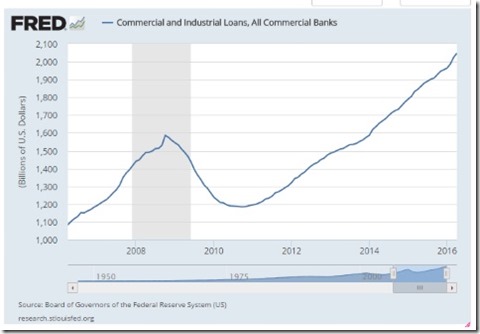 Perhaps he’s talking (through his hat) about mortgage lending?  FRED has some handy data in its Make-A-Chart system for that too. 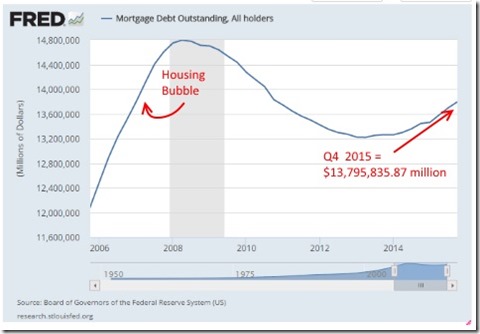 The one chart that is “down” is that for residential mortgage holders in one to four family housing units. 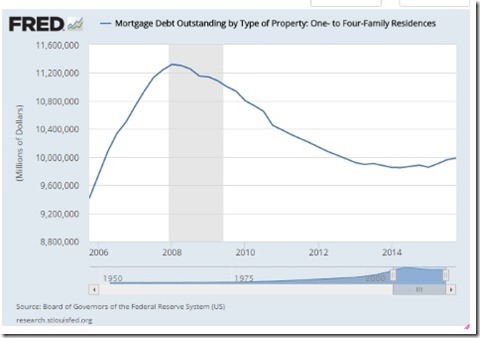 In short, Mr. Trump is simply parroting some line he heard on the golf course?  Some quote he got from the American Enterprise Institute, the American Bankers Association? The Heritage Foundation? From an amalgam of opponents of Wall Street regulation?  He’s certainly not done any serious thinking about the state of commercial and mortgage lending in this country.

Let’s save a discussion of what dismantling the Dodd-Frank Act would do to the average American in terms of personal financial products, student loans, and consumer loans for another post – which I’m sure will yield the same result – Donald the Destroyer doesn’t have a clue what he’s talking about.

Battle Born and Still Squabbling: The Waning Days of the 78th Assembled Wisdom 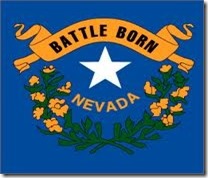 Battle Born and still fighting.  Day 116 and the the squabble over revenue plans and priorities continues in the Assembled Wisdom.  See Let’s Talk Nevada for daily details.  The Latin Chamber of Commerce has lined up with the Governor’s proposal. [Slash Politics]  This makes some sense because those business interests which are opposing the Governor’s plan would actually pay very little under it. [Ralston] No, it doesn’t come as any surprise that those who are opposed to the plan don’t bear most of the burden, while supporters would pay a bit more than their share.

This morning’s agenda for Assembly Ways and Means includes SB 491, “Provides for the award of a grant to a nonprofit organization for use in Fiscal Year 2015-2016 and Fiscal Year 2016-2017 for the recruitment of persons to establish and operate high quality charter schools to serve families with the greatest needs..”

Also on the agenda, AB 480, which would allow mortgage wholesalers from outside the state to act as mortgage brokers.  AB 481 would strike the limitations on the Consumer Affairs Commissioner and B& I Director to provide investigative assistance to the Attorney General in cases involving deceptive trade practices.

The Assembly Taxation Committee will take on SJR 13, the Settelmeyer, Gustavson, Goicoechea proposal to restrict property taxes — “no new taxes, and even less of the old ones” —  “This resolution proposes to amend the Nevada Constitution to limit the amount of certain property taxes which may be cumulatively levied per year on real property to 1 percent of the base value of the property. “ How does this fit with revenue plans and local government interests? It doesn’t.  The beast got out of the Senate on a 12-7 vote.  The city of Reno estimates it will cost about $8 million in lost revenue.

The Assembly Committee on Education will be looking at SB 509 which pertains to charter schools.  From the LCB analysis:

The Senate Education Committee will be looking at SB 92, which requires a teacher deemed minimally effective after the three year probationary period is reverted to probationary status.  And, then there’s the predictable assault on “seniority” as defined in master contract agreements:

Meanwhile, back at the Battle of the Budget……………..