That Changing Trump Tax Plan and the People Who Love It 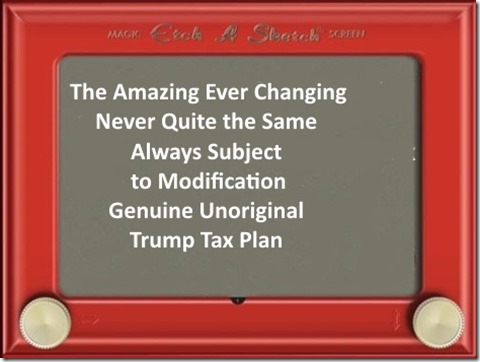 It’s time to haul out the old Etch-A-Sketch template from the Romney campaign for another deployment in the Trump 2016 version – Trump has offered two tax policy proposals.  Neither one accomplishes much more than exacerbating the problems of the current tax code; in fact they’d both do more damage than good.

Representative Joe Heck (R-NV3) candidate for the Nevada Senate seat and Danny Tarkanian, perpetual candidate and now a contestant for the 3rd Congressional District seat, have both endorsed Donald Trump as their choice for president, and here’s what they’re getting in the bargain.

Bracketology: The Tax Policy Center analyzed the initial Trump Tax Proposal (December edition) and this release was followed by significant changes in the original proposal as of August 16, 2016.   And here comes the confusion:

“Trump’s original tax plan included defined brackets, which have since been removed from his campaign website. Trump’s standard deduction increase would make the first $25,000 in income tax-exempt. According to his original plan, the lowest bracket would then apply to all taxable income between $25,000 and $50,000 for single taxpayers, the middle tax rate would be assessed on income of $50,001 to $150,000 and the highest rate would apply to income above $150,000. For married couples, the income ranges would be double these amounts.”  [Motley Fool]

“As a practical matter, Trump’s plan features a sizable tax-free bracket. He wants to quadruple the standard deduction (currently $6,300) to $25,000 for single filers and $50,000 for joint filers. As a result, about half the population wouldn’t pay income tax.” [TaxAnalyst]

Who plays in the Brackets?  Here comes the fun, and the way the Trump Tax Plan benefits the upper income earners.   We need to look at Trump’s “pass through entities.”   This is a loophole not only large enough to drive a tractor trailer through, but most of the freight cars on the Union Pacific as well.

“Trump would go one step further, creating an enormous tax loophole for the rich by applying his 15 percent corporate rate to “pass-through” entities as well. Pass-through entities are businesses whose income are not taxed at the corporate level, but rather passed through entirely to the businesses’ owners and then taxed at the owners’ individual income-tax levels. High-income households can easily avoid paying their full income tax bill by reclassifying their income as pass-through income. This loophole allows Trump to claim that he is closing the carried interest loophole, while actually lowering the rate that hedge fund managers would pay from 23.8 percent to 15 percent.”  [EPI]

In 2012 the state of Kansas under the direction of Governor Sam Brownback and a GOP controlled legislature enacted this loophole with disastrous budget results, because of  reduced taxation rates for LLC’s, S Corps, partnerships, farms, and sole proprietorships.

The normally extremely conservative Tax Foundation is not amused:

When the exemption was passed in 2012, it was projected that 191,000 entities would take advantage of the provision. As more and more people have realized the very sizeable tax advantage of being a pass-through entity in Kansas, that number ended up being 330,000 claimants, over 70 percent more than was anticipated.  It’s important to note here that while decreasing taxes is generally associated with greater economic growth, the pass-through carve out is primarily incentivizing tax avoidance, not job creation. [TaxFnd]  (emphasis added)

Thud.  That’s the sound of budget and revenue problems hitting the floor as a result of a ‘carve out’ for the top income earners disguised as a tax cut for small businesses.  Here’s a simple example. If I were earning $165,000 per year working for the Acme Explosives Company, I would ask my employer Wile E. Coyote to immediately re-hire me as an “independent contractor.”  I would re-create myself as an “S” corporation. Handy, since I live in Nevada which doesn’t have a personal income tax, and thus doesn’t recognize the federal S corporation election.  I file the paperwork, get my EIN number, pay some fees, and bingo! – I am taxed at the 15% rate rather than 33%.  There is obviously no job creation here – just a wonderful and perfectly legal way for me to reduce my “bracket” at the expense of those who don’t have the wherewithal to follow my shady example.

The Wichita Eagle editorial board summarizes:

“As part of the 2012 tax cuts, about 300,000 business owners in Kansas don’t have to pay state taxes on pass-through business income. Not only do many Kansas wage earners think this is unfair, so do some of the business owners receiving the tax break – especially when the state is facing serious budget problems.  The exemption is costing Kansas about $260 million a year in revenue. And contrary to what Gov. Sam Brownback promised, it hasn’t acted “like a shot of adrenaline into the heart of the Kansas economy.”

Trump, Tarkanian, and Heck would seemingly like to have Nevada and 48 other states go the way of Kansas?  Only if we’d like to raise tax avoidance and cheating to an art form.

Playing with Children:  Another element of the Trump Tax proposal is the child care tax deduction, and here too the top 1% fare very well thank you.   It’s important to remember at this point that the economic value of a tax deduction increases with the marginal rate of the payer. Or, the higher your tax bracket the more valuable the deduction – for child care.  The deduction is of no use whatsoever to someone already in the Zero bracket but is ever so helpful for those in the upper income levels.

Playing for the Children:  Mr. Trump is pleased to tell us that the Federal Estate Tax is a “horrible weapon which has destroyed many families…”  Not. So. Fast.  “Today’s estate tax is only imposed on less than 0.2 percent of households. Fewer than two estates in a thousand pay it. More than 2.5 million Americans die each year, but less than 5,000 estates were taxed in 2014. Only estates of $5.4 million or more must pay any estate tax at all.” [C&L]   Perhaps it is not too much to return to the appellation “The Paris Hilton Legacy Protection Act,” for this long sought GOP gift to the rich.

There are some serious questions which should be posed to Mr. Trump and his supporters like Mr. Tarkanian and Representative Heck:

#1.  What exactly are the specified brackets in the modified Trump tax policy proposal?  We can assume that the new rates apply to the old brackets but without clarification from the campaign there are significant questions about the revenue projections (or revenue deficit projections) which remain unanswered.  Do those brackets leave us with a revenue deficit of $3 trillion over ten years?  [Tax Analyst] If so, thus much for budget balancing and other forms of fiscal contortion.

#2. Does Trump mean to allow individuals to avail themselves of the Great Pass Through Tax Dodge?  If so, how does he intend to avoid what’s happened in Kansas?

#3. Does Trump intend to provide child care deductions for the rich while working families see none of the economic benefits of it?

#4. Do Mr. Trump, Mr. Tarkanian, and Representative Heck really mean to advocate for estate tax avoidance for those estates of $4.5 million or more? For less that 0.2% of the United States population?

We may have to wait for Trump Tax Policy 3.0 before these questions can be fully answered?