Gee I’m Glad I’m Not A Conservative Republican, I can sleep at night 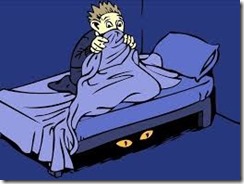 It never fails to amaze me what disturbs the radical right.  When the city of Charlotte, NC declared that transgender individuals should use the rest room which best suits them the troglodyte state legislature promptly  enacted a solution to a non-existent problem.  Should anyone question their motives, such as a Fox News broadcaster asking specifically how many children have been molested in restrooms by a transgender person, the Governor has a quick response:

“How many cases have you had in North Carolina in the last year where people have been convicted of using transgender protections to commit crimes in bathrooms?” Wallace asked.

“Have their been any cases of this?” Wallace pressed.

“If there’s no problem then why pass the law in the first place?” Wallace hammered.

“There can be a problem,” McCrory fired back. “Because the liberal Democrats are the ones pushing for bathroom laws.”

“I’m not interested in that,” he added. “We did not start this on the right. Who started it was the political left.” [C&L]

Oh, because there CAN be a problem. Like there Can be a monster under my bed?   The logic defies description.  Because a city decided to protect the rights of a group of people, and because those people give some other people the creeps, therefore the state legislature should enact a statute forbidding the protection of those aforementioned individuals? Or, perhaps, because some little junior high school boys might want to sneak into the girls locker room we can’t enact protection for transgender kids and adults?  Bluntly speaking, junior high school boys and those adults who haven’t matured much beyond that stage are much more sinister than any transgender males or females using a restroom in which they’re comfortable. 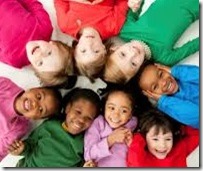 If the Republicans want something to worry about, something more tangible than the non-existent child molesters who seem to populate the imaginations of conservative politicians, how about the scary prospect of hungry children?  In 2014, in the richest nation in the entire world, 15.3 million children lived in what is politely known as “food insecure” households. [FA.org]  As of 2014 there were 415,129 children in foster care. 107,918 children were waiting to be adopted.  Instead of worrying about some fictive character lurking in a rest room, how about getting a bit more worried about REAL children who aren’t eating, and aren’t finding homes?

The  tortured conservative  logic is similar to argument for voting restrictions of which the Republicans are so fond.  Talk about an upcoming election and they begin to sound off on Voting Integrity.  Ask them about the number of prosecutable cases of voter impersonation fraud and the babbling begins.  Inform them that voter impersonation fraud is mostly smoke and no fire [Politifact] [Brennan Center] with 31 cases out of one billion ballots cast [WaPo] and the response is invariably along the line of “But but but It Could Happen.”  Yes, and there could as likely be a monster under my bed.

It’s more disturbing to find that in the 2012 elections some 35.9% of Americans voted.  48.7% of us voted in 1964, 47.3% voted in 1968 and we haven’t gotten above 45% since. [EP.org]  However, by Republican lights it’s better to be frightened of 31/1 billion ballots than of low turnout elections.  What’s the difference between these two issues  — voter impersonation fraud and low voter turnout? One’s a real problem and the other is a Monster Under The Bed.

Beware those doing mathematical calculations!  Like the distraught lady on the American Airlines flight who “saw something” and “said something,” only the Something was an Ivy League economist working on a differential equation. And, no, he’s not an Arab – he’s Italian. [WaPo] That didn’t stop the Ditzel from reporting that he made her feel uncomfortable, like he Might be a terrorist.  Unfortunately, the Ditzel didn’t know that since 2011 there have been 238 Americans killed by terrorist attacks, that would be an average of 29 annually.  29 annual deaths is about the rate for Americans killed by being crushed under unstable furniture or television sets. [WaPo] [CPSC pdf]  One might wonder if she has everything in her home bolted down tightly?

This incident isn’t quite on par with CNN’s epic mistake reporting an “ISIS flag” comprised of sex toys at a British gay pride parade [HWR] but it’s close.  Should we want something REAL to worry about, perhaps we should try avoiding things that make ISIS happy. For example, announcing that we’re AT WAR with ISLAM – which is, of course, precisely the message they’d like to use for recruiting purposes.

If transgender people, imaginary voter impersonators, and putative terrorists aren’t keeping the conservatives up at night then they could always worry about The Debt, The Debt, The Horrible No Good National Debt.  It’s the reason we can’t do anything – like fix our infrastructure or education our children, or take care of our elderly, or provide better Veterans’ benefits, or feed the hungry.  This fear is especially harmful to those who tend to swallow dollar amounts whole.  By the way, if the Republicans need something else to worry about, some 4,800 people die every year from choking related accidents. [NSC]  Here are some soothing words for those who tend to obsess over whole dollar reports on the national debt:

“…this problem — reporters giving the public meaningless raw-dollar amounts — is pervasive in economics journalism. But the people who run CBO are well aware of this point, and present their projections as a percentage of GDP. Interest payments will be 1.3 percent of GDP in 2015, and 3 percent in 2025. The deficit itself will be 2.6 percent of GDP, and then 4 percent, over that same time period.

Obviously, in an ideal world, you’d prefer these numbers to not grow. But increases of 1.7 and 1.4 percent points of GDP over a decade are hardly something to get excited about. [TheWeek]

OMG, we can’t leave the debt to our children! Okay, so it’s better to leave them with crumbling infrastructure? With an archaic energy grid? With a lack of public educational facilities and programs? With no affordable child care? Without food?  Without affordable housing? Without health care?

If the Republicans really wanted something to be frightened of, how about the D+ grade we get for our infrastructure?  Our aging energy grid?  Our colleges scrambling to find funds to replace reductions in state spending?  Those 15.3 million kids going hungry?  Or, if life itself seems perilous perhaps it’s because every day 297 people in American are shot in murders, assaults, suicides and suicide attempts, unintentional shootings, and police interventions. And, every day 89 people die as a result of gun violence. 31 are murdered, 55 are suicides, 2 are accidental, 1 is killed by police intervention, and 1 in unaccounted for. [TBC]

Or, to put the matter in some perspective, between 2005 and 2015 there were 71 Americans killed in terrorist attacks on U.S. soil. During that same period 301,797 were killed by gun violence. [Trace]

Nightmares are distracting and distractions.  The imaginary becomes more intense than the reality.  Somehow we can’t seem to focus on some very real problems in this country – hungry children, un-adopted children, children in inadequate classrooms, low voter turnout, an aging infrastructure and energy grid, gun violence and its tragic outcomes – because we have to deal with the monsters under the Republican mattresses. 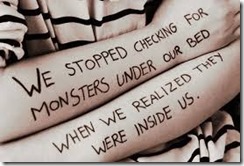 And, that’s a real nightmare.

Comments Off on Gee I’m Glad I’m Not A Conservative Republican, I can sleep at night