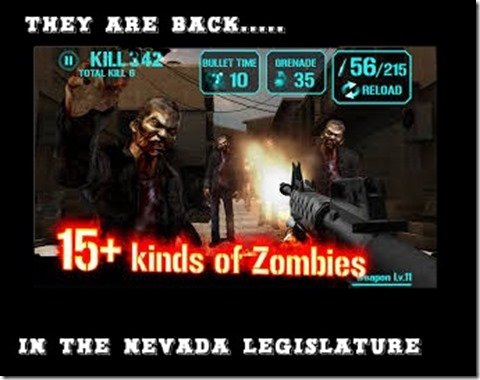 This is the kind of news Nevada can do without:

“A “campus carry” bill believed to be dead in the Senate will be amended into another Second Amendment measure on Friday, Assembly Judiciary Chairman Ira Hansen said Wednesday.

Hansen said that because the Senate Judiciary Committee won’t hear Assembly Bill 148 that would allow those with concealed weapons permits to carry their weapons on college campuses, it will be amended into a Senate bill on the deadline day for committee action on most bills.” [LVRJ]

The bills in question is SB 175 and SB 240.  The Guns Galore crowd, championed by Michele Fiore (R-NRA) and Ira Hansen (R-Ammostan), wants those with concealed carry permits to be able to pack “heat” on college campuses.  Little matter that others may find this uncomfortable or downright dangerous.  Happily, there are some restrictions in place on concealed carry permitting in this state – not that the Ammosexuals wouldn’t like to eliminate those eventually.

The requirements in Washoe County are essentially the same. A person must be at least 21, provide documentation of competence with a firearm, meet the standards set forth in NRS 202, have no DUIs in the preceding five years or record of “substance abuse.”  [Washoe pdf]

One obvious feature of these figures is that there are a significant number of young males on both major college campuses in this state.  We do know from the CDC* and other sources  that firearms and young men aren’t a particularly good mixture.  Pew Social Trends reported:

Thus, what the ammosexual alliance is proposing is to place more firearms in a setting in which there are significant numbers of already vulnerable individuals in the setting.

Aside from the human tragedy there are economic factors to consider before advocating any further proliferation of firearms and the situations in which those guns can be allowed.

And, then there is the “market” argument, which the Minneapolis Post analyzed as follows:

“Treating gun violence as an externality assumes that weapons markets are legitimate and that we must live with the consequences.  However, certain aspects of this market may not be legitimate. Markets do not exist in a vacuum.  They are created and designed by people, and societies can decide to modify or restrict markets depending on its values and goals.

Debra Satz, a professor of philosophy at Stanford University, addresses this in her book “Why Some Things Should Not Be for Sale: The Limits of Markets.” At the heart of her analysis is the concept of noxious markets, i.e. “markets that people find especially objectionable” and which should be curtailed or eliminated.

One important reason why societies deem some markets as noxious is that trade in these goods causes extreme harm to individuals and/or society.  Markets in assault rifles, large-capacity ammunition magazines and related items could be thought of this way. The damage caused by guns used to commit crimes is so great that we must regulate them and, in some cases, eliminate them.”

We know, for example that alcohol and tobacco products are often classified as “noxious markets.”  There are spill-over effects in society, in terms of public health costs, and other related expenses or losses.  Therefore, we regulate and use tax policy to curb the consumption and use of these items.  State legislatures are quick to add “sin taxes” to diminish the ‘noxious’ markets for some products, especially in the tobacco categories. However, they’re remarkably slow to consider taxing/regulating the use of guns and ammunition.  An amended SB 175 merely serves to advance a ‘noxious’ market, rather than curbing firearms proliferation which endangers young people – especially young men.

U.S. News and World Report was more blunt on this subject, when speaking of the economic costs of firearms and school security in America:

“However, the firearms industry has managed to avoid picking up the tab for its externalities. A recent proposal by Wayne LaPierre of the National Rifle Association shows the size of the problem. After the Sandy Hook school shooting, the NRA proposed that the best solution to gun violence in school is to have more guns in school. They argued that every school should post an armed guard (or several) to stop would-be shooters. Let’s set aside the constitutional and practical considerations and just consider the economics of this for a moment: It would cost nearly $5 billion per year to put a trained, equipped, armed guard in each of America’s 132,000 K-12 schools. That calls for a fee—let’s call it the “Schools Security Fee”—of $500 to $750 for every new and used handgun purchased in the United States. The fee is roughly the cost of a typical good-quality new pistol! If imposed, it would double the price of handguns and cripple the firearm industry. Yet it’s ironic that many of the folks who claim to hate taxes and government see no problem in proposing a $5 billion expansion in government, which necessitates taxes to pay for it.”

Whether viewed in macro-terms such as in the classification of firearms as a ‘noxious’ market, or in micro-terms as in a discussion of school safety officers, the message is essentially similar.  The manufacturers of firearms and their Ammosexual Allies are arguing that lethal weapons do not constitute a ‘noxious’ market and therefore should not be taxed or regulated even if the economic costs run into the $174 billion range.

While we can have socially oriented or economically based arguments over firearms regulations it must be admitted that there is an emotional factor to consider.  The positions taken by the Nevada Firearms Coalition which calls for legislation to “enhance personal liberty,” perceives proliferation as a ‘beneficial’ market, and a positive social good.**  “Armed” with this emotional attachment to firearms and their retail sales, the Guns Anywhere advocates are perfectly willing to hold other, and better, legislation hostage in order to advance their cause. Witness:

Winston Churchill was right: “A fanatic is one who can’t change his mind and won’t change the subject.”

* Warning: Depending, of course, on your download speed this file can be very slow loading. (94.3 mb .zip format)

Comments Off on Zombie Guns Blazing in NV Legislature